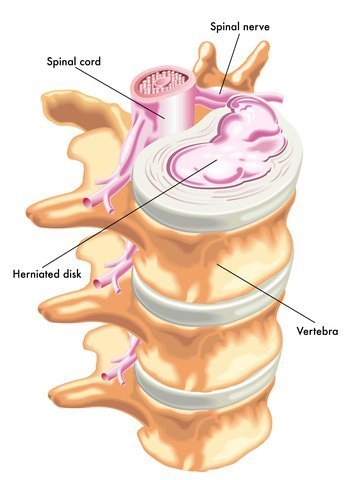 Slipped or herniated discs occur when the jelly-like centre (nucleus) pushes against its outer ring (annulus). If the disk is very worn or damaged, the nucleus may squeeze all the way through, causing a prolapse.

This can similarly be caused from joints in the neck causing pain to radiate down into the arm or hand which is called a Brachalgia.

Sciatica and disc problems are often caused by twisting movements, lifting heavy objects, and bending. This usually only occurs if weakness in the disc is already present.

Sciatica and disc problems can be treated by osteopathy. Acupuncture is particularly effective when nerve pain is involved, having the added advantage of the therapist not having to apply further pressure or movement to the spine.

Most disc lesions will resolve with time and expert treatment. However there are cases that may require referral for either injection or surgical opinion. Laurens Holve has consultants to whom he refers sciatica and disc problems when necessary.